Ultrasonics for the cleaning of aniloxes works through the process of cavitation. Cavitation is produced through the rapid flexure of the tank base or sides through the formation and collapse of millions of vacuum bubbles.

These bubbles rise up through the tank fluid until they hit something or reach the surface upon which they implode with great speed and high pressure. This speed of collapse is so fast and the pressures so high, that temperatures of about 4750° C  (5000K) for a nano-second and over a microscopic area are produced and while this in itself is not enough to make the tank fluid boil, it is enough to rip open any oxygen O2, or Ozone O3 molecules that may be present within the fluid. This phenomenon is known as ‘Sonolysis’. When the molecules are torn apart what is left are either an atom with a spare electron or a molecule with a spare electron. These are called ‘free radical’ atoms or ‘free radical’ molecules and are both highly reactive with anything that is around them. In this case it is the cleaning chemistry. The result is a boost to cleaning performance resulting in cleaning times that are up to 3 times faster than when Active Cavitation is not used, thus greatly reducing make-ready times and reducing ROI through more available press run hours.

When high frequency sound is applied into a fluid, the first thing that it tries to do is drive out any gases that may be present. If a roll was present in the tank at this point (which is not usually the case), it is likely that a clean stripe would be witnessed on the roll. The location of this stripe would correspond with the part of the roll that was submerged at the instant that the ultrasonics was turned on and de-gassing occurred.

In order to gain benefit, air (oxygen) needs to be re-introduce at strategic points throughout the cleaning cycle so that the ultrasound can rip apart the molecules as described above. This is carried out through Active Cavitation pipes that are placed through the tank directly under the roll.

Active Cavitation is a unique technology to Alphasonics and is protected by worldwide patents. 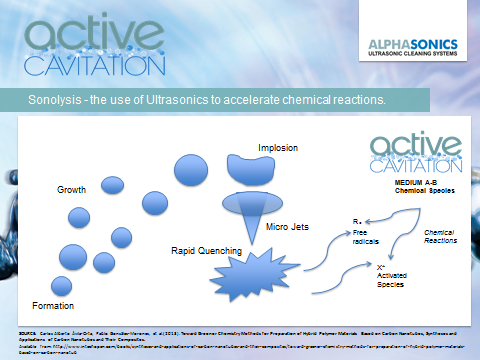